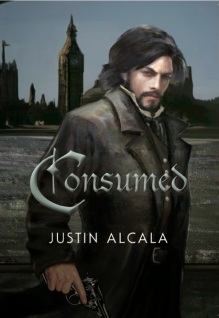 Author: Justin Alcala
Publication Date: September 11, 2014
Published by: Zharmae Press
I received the e-ARC/Media Kit from the publisher for the blog tour.

Sergeant Nathaniel Brannick is trapped in Victorian London during a period of disease, crime, and insatiable vices. One night, Brannick returns from work to find an eerie messenger in his flat who warns him of dark things to come.
When his next case involves a victim who suffered from consumption, he uncovers clues that lead him to believe the messenger’s warning. Despite his incredulity, he can’t help but wonder if the practical man he once was has been altered by an investigation encompassed in the paranormal. That is, until he meets the witch hunters, and everything takes a turn for the worse.

One of the beauties of knowingly reading outside your genre is that you get to experience the story with no expectation/presumption. I had that exact experience when I read ‘Consumed’, walking into the threshold its mesmerizing, terrifying Victorian horror world with little idea of what was going to happen and what I would be subconsciously looking for. It was a pleasant experience overall, something I am grateful for — something I might do again in the future, for a limited set of genres (‘genre’ as in ‘what is actually in this book’, not as in ‘what age group this book is targeted for’).
Consumed was — to me — the story of a broken, lost man’s journey back to a meaningful, purposeful life. Granted, that journey involved a murder mystery to solve, vampire hunters and their targets swarming parts of London, an addiction to opium, and a shady work partner. But putting back together pieces of a broken life is the essence of Nathaniel Brannick’s emotional journey — this was what I saw him doing between the lines of the action. Each event in the book was a wake-up call for him, and with each screw-ups and near-misses he was forced to see what he had been doing to himself and his life.
Of course, this doesn’t mean the action and the twists within the plot weren’t great. Consumed was so quick-paced, and throughout the wild ride, I was on the edge of my seat the whole time trying to guess what would happen next — and most of the time I would guess the wrong thing! Every scene, character, and setting in this book lived and breathed horror. Even in the lightest moments, I could still feel a lingering sense of terror, of a dark shadow lurking in the background. I had a hard time trusting every new character, to the last moment their motivations were explained. And even after the last page, the question of whether Nathan had chosen the right allies still lingered in my head. Who were crazy, and who were not? To what extent did everyone tell Nathan the truth? I must say I was quite delighted to know that a sequel is a possibility. Nathan’s story simply couldn’t end where it did in Consumed!
Character-wise, Consumed has a lineup of interesting, quirky characters. Whilst some of them did fill archetypal roles, they didn’t feel archetypal — talk about Davis, the womanizing/overeating detective partner; the witch-hunter siblings Vasile and Vasilica Ivanescu (the latter delighted me a lot — a fighter female in historical fiction :D); Nathan’s lively, not-quite-the-shrinking-violet-proper-lady late wife Catherine; the cat appropriately called ‘Hades’; a lot of others. And, of course, one just can’t leave out Nathaniel Brannick. A brilliant detective with flaws and heartbreak, a distinct way of speaking (I found his sarcasm endearing), and a honest voice. Nathan’s voice was one of the things I adored about Consumed. It was era-appropriate in terms of grammar and vocabulary choice, but it didn’t feel faked and I didn’t have to strain to read it (as I sometimes had to do some other historical fiction work, as they tried really hard to emulate classics).
Overall, Consumed was an enjoyable haunted-house-roller-coaster ride in a foreign theme park for me. Apart from a few paragraphs of chunky dialogue/exposition towards the conclusion, I liked everything that I read. Whilst this book didn’t shatter my world the way some other books did in the past, I would still recommend it to older teenagers and adults who are keen to read an action-packed, distinct historical horror. I think ‘Consumed’ won’t disappoint.
Rating: 4.0 out of 5
Nath S’worth at 20:22
Share

One thought on “A Touching Early Review of Consumed”